Combining speed and power with a longer lasting battery charge, you get arguably the fastest, most efficient and cost-effective battery-operated floor removal machine on the market today.

So, what makes the Hybrid so special?

1.The Hybrid Optimum Bronco’s overall length is only 56 inches which makes it easy to maneuver and fit in an elevator. Many of the competitor’s machines are longer making them difficult to fit in an elevator.
2.Travel speed is over 225 ft. per minute significantly outpacing most machines on the market
3.Burly and powerful motor: 11.3 hp continuous and 22.6 hp peak.
4.The Hybrid Optimum Bronco weighs only 2,100 lbs, lighter than most battery powered machines on the market today
5.Warranty is 1-year parts/labor and 2 year on batteries (no labor after 1 year on batteries).
6.Has a 420-amp hour battery pack, This allows the Bronco to run faster and operate more efficiently than most other machines on the market. While some machines may advertise that they have a longer run time, this gain is often offset by lower speed and productivity. You have to be on the machine longer to get the same amount of work done!
7.The Bronco Hybrid has a proprietary battery balancing system that, when charging, diverts power evenly to all four battery banks and, if necessary, gives a bank more charge power to bring it even with the other banks. This is very important for prolonging battery life.
8.The Optimum can charge while operating. This “hybrid” feature reduces the battery consumption by up to 50% to extend the battery run time on the job.
9.The Optimum’s Low Battery Alarm System will sound an alarm when the battery pack drops below the safe level. After two minutes, if the pack is not charged, the system will actually turn off the machine to prevent damage from excessive discharge. This can be overridden by turning the key on and off to get to an area to plug in for charging.
10.With the Optimum’s patented Power Glide suspension system, the frame is articulated rather than wiggling the blade to keep the blade flat to the floor. This is much more efficient and makes for a faster, smoother ride when removing flooring.
11.Competitive strippers use gear pumps for their hydraulics. The Bronco uses hydrostatic pumps for its hydraulics.

To reduce speed, you must shear the oil flow (divert the unused oil back to the reservoir). This is done with servos/proportion valves. In order to get reasonable operating power and control, the speed must be slowed down.
The Bronco’s hydraulic circuit is a closed loop circuit which means that the only oil that is returned to the oil reservoir is the blow-by from the pistons. There are no servos or proportion valves in the Bronco’s system. The pumps are operated mechanically.

The diverted oil contains wasted energy in the form of heat which must be evacuated and which raises the ambient temperature of the work environment.
Hydrostatic pumps run at much lower pressures which is a better use of energy and safer to operate. And the Bronco’s hydrostatic pumps have a positive auto-neutral return system that immediately returns the controls to neutral when released. The neutral return is quick and accurate with no coasting. The machine comes to a quick, positive stop every time.

Gear pump driven equipment operates in a herky-jerky fashion. When trying to move with precision, there is no initial response on the controls, and then suddenly the machine lurches forward. This erratic cadence puts walls and molding at risk.
The Bronco’s controls in tight areas is very precise. The controls are responsive even when moving inch by inch such as when boarding an elevator. 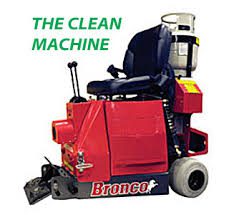